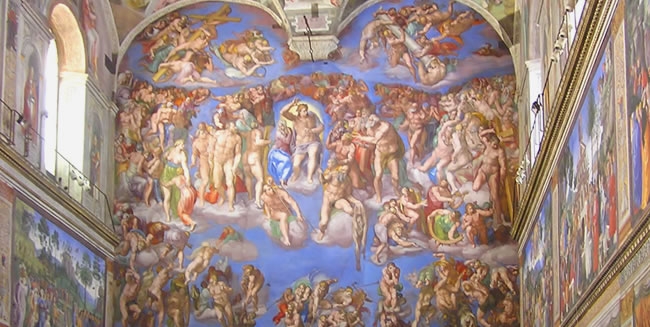 The Sistine Chapel is situated at the southern end of the Vatican Museums and north of St. Peter's Basilica, the building is of no great architectural interest (rectangle in shape 40.93 meters long by 13.41 meters wide), however the masterpiece artwork within the building created by Michelangelo Buonarroti (1475-1564) is what has made the Sistine Chapel world famed and a must see for anyone visiting Europe.

Michelangelo's Sistine Chapel ceiling paintings depict scenes from Genesis in dramatic and striking detail, while The Last Judgment on the end wall is powerful and stunning. The Sistine walls are also covered with important frescoes by other artists from the Renaissance era, depicting different biblical scenes as well as portraits of contemporary popes.

But not to minimize the importance of the Sistine Chapel as merely an artistic wonder. The chapel is a symbolic statement of Catholic authority and the site where papal elections in conclave are held to this day.

History of the Sistine Chapel

The building was commissioned in 1475 by Pope Sixtus IV, and where the Sistine Chapel derives its name from. The Sistine Chapel was consecrated to the Assumption of the Virgin on August 15, 1483, and was designed for the function of being the pope’s chapel and the location of papal elections. The same function that is still used to this very day.

From 1481 to May 1482, Sixtus IV called on Renaissance painters Domenico Ghirlandaio, Cosimo Rosselli, Sandro Botticelli, and Perguian Pietro Perugino to paint the walls with frescos. Some historians also believe Luca Signorelli may have also worked on the project.

The original ceiling paintings were created by Piero Matteo d’Amelia, who included a ceiling with stars. But in 1508 Pope Julius II della Rovere called upon Michelangelo to repaint the chapels ceilings.

At the time Michelangelo was asked to paint the Twelve Apostles and several other ornaments on the ceiling, however when he began to work on the project, he convinced the pope of a grand design of more than 300 figures.

Michelangelo’s masterpiece project took about four years between 1508 to October 31, 1512, in difficult conditions high above on scaffoldings with constant pressure from the pope to complete the project. The harsh work permanently damaged Michelangelo’s vision.

Against his wish, Michelangelo was summoned by Pope Clement VIII. He was in his sixties when he began to paint The Last Judgment (1535-1541) on the wall of the altar. The undisputed masterpiece was the largest fresco painted at the time.

The lower side wall portions of the Sistine Chapel were covered with sets of tapestries depicting events from the Gospels and Acts. The tapestries were woven in Brussels between 1515-19, and designed by none other then Raphael.

The Sistine Chapel has completed several restoration, beginning with the project of the wall frescos in 1965. The ceiling, the Last Judgment, and lunettes have also completed a painstaking restoration process which lasted from 1980 to 1994. This last restoration also included the removal of several “modesty” drapes from nude figures.

Holy Land tours visiting Vatican City today will experience the Sistine Chapel with the full vibrancy of the artist colors. Thanks to the amazing talents of Michelangelo, the Sistine Chapel (Cappella Sistina) has become one of the most famous art galleries in the world.

The chapel is a rectangle barn-like shape with the exact dimensions of the Temple of Solomon as described by the Old Testament, 40.93 meters long by 13.41 meters wide. The building is 20.70 meters high and roofed topped with a flattened-barrel vault. It features six tall windows on the side long walls.

It is easy to be taken by the ceiling of the Sistine Chapel, however don’t miss the stunning wall frescos featured on three horizontal levels. All painted by Renaissance masters. The frescos are colorful scenes from the Old Testament on the left which correspond with similar scenes from the New Testament on the right side of the chapel. Old to New Testament is a frequent theme among Christian theology, however with the Sistine Chapel Pope Sixtus IV gave a special meaning illustrating papal authority from Moses to Christ, and on to Peter, and it is his portrait which begins the row of popes painted in the chapel.

The Arch of Constantine “The Punishment of Korah,” can be seen on a wall fresco by Boticelli, and Perugino’s “Christ Gives the Keys to Peter,” on another wall fresco. Both frescos represent an underlined papal authority, provided by Constantine the Great, the first Christian emperor who was traditionally believed to have bestowed secular authority over the western world to the church.

The famous Sistine ceiling is divided into 9 sections - the 9 stories of Genesis beginning with Creation and to the intoxication of Noah. The scenes commence from the altar and proceed toward the entrance. The twisting male nudes that decorate the chapels corners of the ceiling were very controversial at the time.

Michelangelo's masterpiece The Last Judgment, is painted on the altar wall. This stunning work centers on Christ the Judge, who compels the damned to hell and lifts up the saved to heaven. Surrounding Jesus are the saints, the sun and the planets.

When visiting the Sistine Chapel look for Michelangelo's self-portrait which appear twice in The Last Judgment: in the flayed skin held by St. Bartholomew and the figure located on the lower left corner, who is watching the rise of the dead.

More in this category: « Tour the Church of St Peter in Gallicantu in Jerusalem Christians Traveling to Israel Visit The Church of the Primacy of St. Peter »
back to top