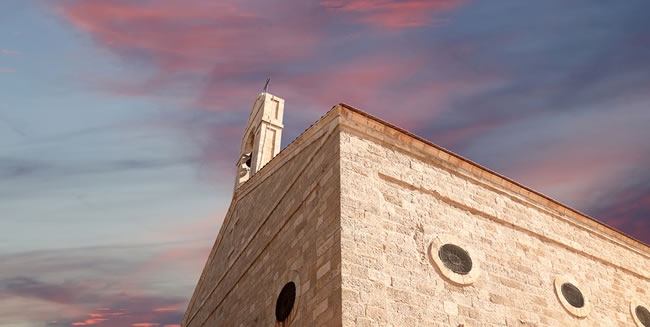 Located only 18.6 miles from the capital Amman, along the 5,000 year old Kings' Highway, is one of the most amazing places in the Holy Land. After driving past several ancient cities, you’ll come upon Madaba, known worldwide as the “City of Mosaics.”

This ancient town of the Jordanian Plateau, was resettled by Christian Arab tribes-people from the Karak area in 1880 A.D. Today Christians tours to Israel and Jordan participants will find it inhabited by both Christians and Muslims alike. Not surprisingly Madaba is home to a great deal of antiquities, many of which can be seen in the Madaba Archaeological Museum, the Mosaic School of Madaba, and Madaba Archaeological Park.

The Holy destination of Madaba has a long history mentioned in the Bible including Numbers 21:30 and Joshua 13:9 and at the time of Exodus, about 1200 BC, and an interesting find was a tomb from this very period found in the east part of Madaba.

From the Bible, Madaba is recorded among the Cities of the Plain in Moab that were were conquered by the tribes of Israel. According to the King of Moab or Mesha inscriptions, the city was liberated by the Moabite King around the mid 9th century BC.

At the end of the 2nd century BC Madaba was in conflict with the Hasmonean , when John Hyrcanus conquered the town after a long siege. Later, Hyrcanus II, in exchange for help he asked for in the war against his brother Aristobolus, pledged to restore the city to the Nabataean King Aretas III at Petra, together with other cities in the area. There’s strong evidence that suggests Madaba remained within Nabataean influence until the region became a Roman Province of Arabia in 106 AD.

Under the Roman Empire Madaba became the typical provincial town, featuring colonnaded streets, important temples and other beautiful buildings, large water cisterns and a city wall. The town flourished under Rome through the 8th century and more. Ruins of the Roman town are seen in the long stretches of the paved street in Madaba's Archaeological Park.

Madaba's main holy site attraction can be seen in the contemporary Greek Orthodox church of St. George which is home to a stunning 6th century Byzantine mosaic map of Jerusalem and other holy sites. With two million pieces of colored stone and a full 25 x 5 meters of the mosaic can be seen today – the holy land map depicts hills and valleys, villages and towns, all the way to the Nile Delta.

The masterpieces in Madaba are unrivalled in all of Jordan, however there are literally dozens of mosaics from the 5th to the 7th century all throughout Madaba’s churches and buildings. In accordance with Jordan’s high commitment of restoration and preservation the mosaic masterpieces are part of an extensive archaeological park and museum area that encompasses the remains of Byzantine churches, including the incredible mosaics of the Church of the Virgin and the Hyppolytus Hall, part of a 6th century mansion.

More in this category: « Christians Tour Israel and Tabgha along the Shores of the Galilee Traveling to Jerusalem the Holy City for Christians Gives Great Meaning »
back to top