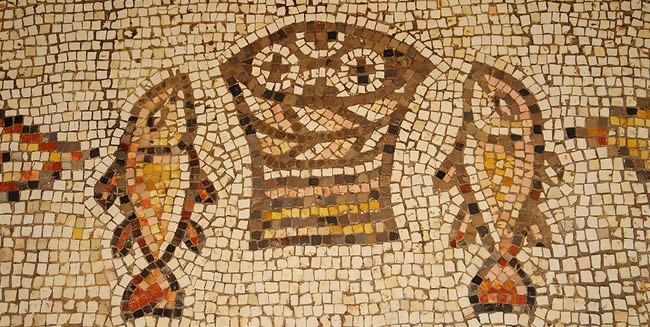 Christians Tour Israel and Tabgha along the Shores of the Galilee

A truly breathtaking location in the Holy Land is Tabgha, a quiet cove on the northern shore of the Sea of Galilee and the scene of many Gospel stories, such as the Multiplication of Loaves and Fishes (Matthew 14:15-21, Mark 6:30-46, John 6:1-14). Today Christians touring Israel will find the Church of Multiplications that contains a beautiful mosaic of small loaves and fishes, marking the location where Jesus blessed the bread, a celebrated symbol since early Christians marked the site centuries ago.

Tabgha is also the traditional location to be where The Lord called for his disciples. The Scriptures say the Lord walked along the shore of the Galilee and called out to Simon Peter and Andrew who were fishing with their nets casting them into the lake. Walking along, Jesus saw two brothers, John and James who were preparing their nets with their father Zebedee. All of them followed the Lord.

This area along the shore of the Galilee have been frequented by fisherman for thousands of years because of thanks to it's springs (Seven springs emerged at Tabgha, six found today), producing warmer water from the rest of the lake. This water helps produce algae, which then attracts a greater quantity of fish. Evidence of ancient boating activity at Tabgha has been found in a recent discovered harbor on the shore after the water levels dropped at the lake. With out question the site was a flourishing community during Jesus days.

It is Tabgha where Jesus met after the resurrection with his disciples for the "last breakfast" (John 21). The Lord restored Peter by asking him three times if Peter loved Jesus (John 21:15-17). Roman Catholics associate this tradition with the Lord naming Peter as the singular leader of the Church, Peter's Primacy.

More in this category: « A Spiritual Retreat to Magdala on a Christian Pilgrimage Tour to Israel the Holy Land Madaba is One of the Most Memorable Holy Site Destinations on our Christian Tour to Israel and Jordan »
back to top